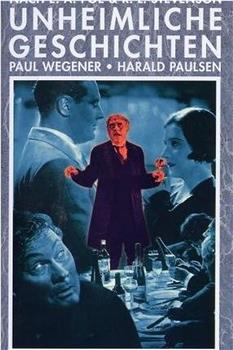 Paul Wegener, in his first talkie film, plays an evil inventor who is pursued by investigative journalist (Harald Paulsen) through three famous horror tales. The first is based on Edgar Allen Poe's 'The Black Cat'. Wegener kills his wife and hides her behind a wall in his basement. The reporter, who hears the wife's screams as he is passing by, calls in the police days later af...

Edgar Allan Poe's The Black Cat, The ****** of Doctor Tarr and Professor Fether and Robert Louis Stevenson's The ******* Club